Special Agent Dana Katherine Scully is quite possibly the best woman who has ever graced the small screen. I seriously want to be her when I grow up. And not just because she’s smart, professional, good at rolling her eyes, and capable of holding her own against serial killers, rogue agents, and monsters. 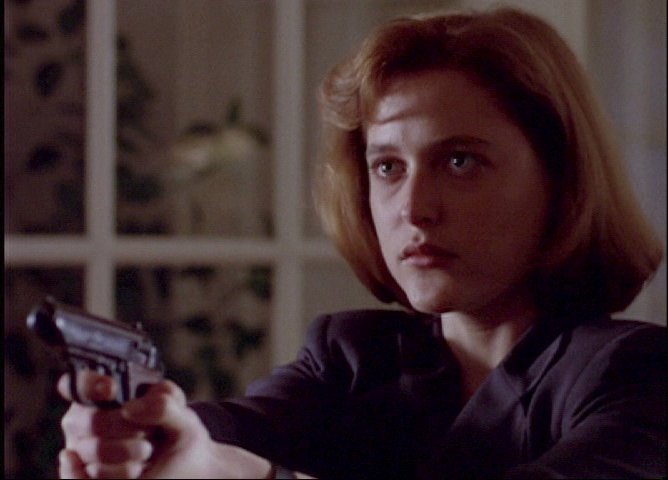 Consider Scully’s life for a moment. Over the course of six seasons (a little less than six years in her timeline), she loses her dad, her sister, her dog, and her good reputation. She almost loses her partner/true love several times. She’s been abducted and experimented on, almost died from cancer, had a cloned baby daughter who also died right in front of her, and spent some time as an alien egg in the depths of Antarctica. And that’s not even counting her almost-weekly confrontations with superhuman freaks that can can squeeze through air vents or control people with their voices. Her faith in science, in God, and in her mission at the FBI is constantly being put to the test. The fact that she’s a woman working in a very masculine and often rather sexist environment is just the icing on the cake.

If most of us had to go through even half that stuff, we’d probably be reduced to helpless, quivering balls of neuroses. At least, I know I would be. But not Scully. She deals with these things on her own time and then shows up to work the next morning, makeup intact. That’s the thing I love about her. She shows up. If someone she cares about needs help, or if innocent people are in danger, she’ll be there with a lab coat and a gun, ready to do what’s necessary. It doesn’t matter what she’s going through personally, how dangerous the rescue might be, or how much she disapproves of what the person (*cough*Mulder*cough*) did to wind up in trouble, she’ll get them out of it. She might be sarcastic about it, but she’ll get it done. And not because she doesn’t have feelings or can’t be hurt by the crap life throws at her (quite the contrary), but just because she cares about others more than herself.

She also has a wonderfully deadpan sense of humour, and she’s the supreme mistress of the eyebrow lift. This woman is my hero.

So, guess who I was for Halloween?

This was one of the easier costumes I’ve ever done. I already have a few articles of business attire lying around, so all I had to buy was a more Scully-esque blazer, a toy gun, and a can of temporary red hair dye. I made my own FBI badge using this handy-dandy link and a picture of Scully I printed out. It helped that I already had a laminated name tag pouch from a conference. The hair was the only difficult part – I had to use a bunch of curlers to give my hair that lifted bob look – and I still don’t think I completely nailed it. But the important thing is, I was well-armed against trick-or-treaters. And I now have a fake FBI badge, which is pretty sweet.

Everything about Scully is awesome (except her dress sense in the early seasons – that was a bit appalling). I only wish I could be her for more than one day out of the year.