For every character I love on Supernatural, there’s at least one more that I love to hate. Here are some of the best/worst, ranked in order of evilness.

He’s not the biggest boss the Winchesters have fought–not by a long way–but he deserves the top spot on this list because he’s the ultimate cause of literally every bad thing that has ever happened on this show. Which is a lot of bad things. Think about it: if it weren’t for Azazel, Sam and Dean’s parents and grandparents (at least on their mother’s side) would still be alive; Sam would have lived a normal, demon-blood-free life; the Apocalypse would never have been an issue; and neither Winchester brother would have died or gone to Hell at all. Also, it really doesn’t help that every single Azazel actor plays him like a pedophile. Every time this guy shows up, he just ruins everyone’s day. Including mine.

Most Supernatural villains aren’t especially good at subtlety. They tend to spend a lot of time loudly gloating over their victims, letting out evil laughs, showing off their telekinetic skills, and generally broadcasting their evilness to the entire neighborhood. Not Lucifer. Lucifer doesn’t have an evil laugh. He never raises his voice. His “gloating” consists of calmly, and even sympathetically, pointing out the facts of the heroes’ situation. He doesn’t even lie (although he does bend the truth at times). He truly believes that he’s a good guy trying to get justice for the wrongs his family has done him, and you’d be tempted to believe him–except that his idea of justice consists of wiping out humanity via zombie apocalypse. Not to mention what he does to Team Free Will in the second half of “Swan Song” alone. He’s possibly the smartest villain ever to appear on this show…and he’s definitely among the worst. 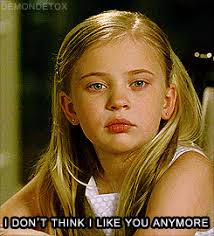 ESPECIALLY IN THE LITTLE GIRL VESSEL. Little-girl Lilith only appeared in two episodes, but that was enough to burn her into my mind as the creepiest child in the long, storied history of creepy children. I mean…that kid was so cute. Which just made everything she did ten times more horrible. She’s the kind of wholesome girl who enjoys tormenting innocent families by possessing their daughters and then killing them off one by one. And she eats babies. And she was the first person to kill Dean for real. Even though it turned out to be a very bad thing in the long run, I can’t say I was sorry when Sam finally killed her.

The angels of Supernatural tend to be world-class jerks, but Zachariah is a special case. He’s basically your standard corrupt corporate executive, but with superpowers. He’ll stoop to any dirty trick in order to get what he wants, and what he wants is mainly to destroy the world so the angels can turn it into their idea of paradise…which, judging by the typical angelic mindset, wouldn’t exactly be a fun place for humans. What makes it worse is that, unlike most angels, Zach is fully aware of what a slimeball he is. He just doesn’t care. In his own words: “Lucifer may be strong, but me–I’m petty.” Now I can never look at Woody from Psych the same way again.

He’s just a creep. And what we know about his history with Dean is beyond disturbing. That torture scene in “On the Head of a Pin” was hard to watch for a lot of reasons, and all of them were Alastair’s fault. Thank goodness he became yet another deserving victim of Sam’s psychic powers.

And the best thing about Supernatural villains? They always get what’s coming to them in the end. Usually a sword or a bullet to the face. Justice is sweet.