Let me introduce you to one of my favourite fictional men. His name is Eugenides, and a lovely lady named Megan Whalen Turner wrote four books about his adventures, starting back in 1996. They have never been made into movies, and I think they may have been a bit overshadowed by a certain other YA fantasy series that started hitting the U.S. around the same time. I’m not even sure what to call them collectively – The Queen’s Thief series? Just the Thief cycle? The Chronicles of Gen? Let’s just say, the fandom isn’t huge. There is one, but it’s a little hard to find.

The series consists of four books (so far – there are faint and fading rumours of a fifth): The Thief, The Queen of Attolia, The King of Attolia, and A Conspiracy of Kings. They don’t necessarily need to be read in order, although I wouldn’t recommend starting with The Queen of Attolia. Calling them “fantasy” is a bit of a stretch. They don’t involve any magic or magical creatures, per se. However, the three kingdoms in which they mostly take place–Sounis, Eddis, and Attolia–are imaginary. Picture something like ancient Greece or Persia, but with a more Roman-style army and a few pieces of advanced technology, like watches and guns. Oh, and these kingdoms are ruled by a pantheon of gods, who do show up from time to time. So the fantasy label works. 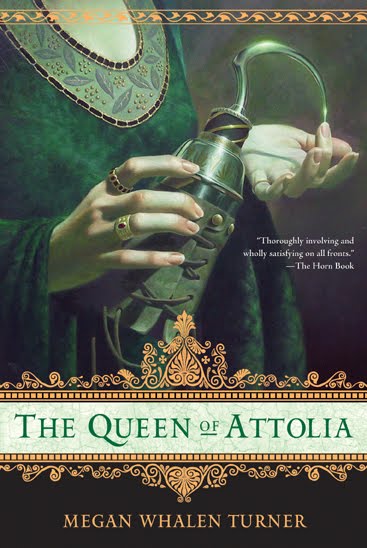 The first book is narrated by our hero, Gen, a young thief who has gotten himself thrown in prison in Sounis by bragging too loud about his thieving skills. A magus (royal scholar/advisor) recruits him to help steal a priceless artifact from Eddis, a neighboring country with which the king is having prickly relations. So Gen goes, in order to secure his freedom. The first three books follow a similar pattern, with Gen stealing bigger and bigger treasures and getting involved in more and more complicated political schemes. The fourth deals mostly with the adventures of one of his friends from the first book.

Except…not really. What makes these books so beautiful is that nothing about them is ever the way it seems at first. Eugenides’s most important character trait is that he is an incredibly skilled liar. So skilled that he manages to fool, not only the other characters, but the reader, about who he is and what his goals are. In every single book. He is, after all, named after this universe’s version of the Trickster.

Gen is a little bit like an alternate-history Batman. He constantly appears conceited, immature, lazy, and not too bright, kinda like what you’d expect from a common thief. But underneath that cover, he’s ruthlessly intelligent and almost always has the other characters wrapped around his finger. Also like Batman, he hates killing people.

If you like a good love story, these are also the books for you. And Eugenides’s love interest is one of my favourite female characters of all time (can’t tell you who she is, since it comes as a bit of a surprise in the second book). Suffice it to say, she’s every bit as smart and complicated as he is.

Oh, and did I mention the gods? Yeah, I love the gods, too. They’re nice and mysterious, and you can never quite tell whose side they’re on. I also love how each book slips at least one story from the imaginary mythology into the narrative somewhere. Ms. Turner has quite the creative mind.

Here she is! My hero.

I doubt these books will ever be made into movies, but they’re clever and extremely entertaining. If you haven’t read them yet, I’d recommend making a trip to the library soon. Then we can compare favourite characters and stories!

4 thoughts on “The Queen’s Thief”