Most of the time, the Doctor is unquestionably the hero of his show. (I mean, it IS named after him.) He fights monsters, saves civilizations, and stands up for the oppressed, all while running a lot and generally being a friendly, quirky guy.

But he’s also quite arrogant, meaning he doesn’t always appreciate beings with lower intelligence and shorter lifespans as much as he should. As a Time Lord, he’s immortal, meaning he has accumulated at least a millenium of emotional baggage by this point on the show. He’s the last of his kind (more or less), meaning he’s lonely, suffers from survivor’s guilt, and doesn’t have many authorities that he recognizes to keep him in check. And he’s rather powerful, meaning that when he has bad days…everyone else does, too.

Lest we get too Martha Jones-ish about how amazing the Doctor is, here are some of his less heroic moments. Careful! Spoilers!

1. When he parted ways with Captain Jack.

At the end of the first New Who season finale, “The Parting of the Ways,” Rose has saved the world by vaporizing the Daleks, the Doctor has saved Rose by absorbing the time vortex, he has regenerated into David Tennant, and the TARDIS is leaving the crappy world of Satellite 5 behind for good. Yay! Except…one of the last shots in the episode is of Captain Jack Harkness, who just gave his life trying to defend the Doctor, staring ruefully after the TARDIS as it de-materializes. Now, I am not a huge Captain Jack fan, but stranding a companion alone on a spaceship full of corpses, far away from his home country and time, and without so much as a “goodbye,” is pretty cold. The Doctor totally knew what he was doing, too. We find out later that he didn’t bring Jack along because Rose had turned him into an anomaly–a man who can never die. And the Doctor doesn’t like anomalies. Though he didn’t seem to have that problem with plastic Rory…or any of the temporally-screwed-up Ponds. Way to be selective about your prejudices, Doctor. Still suffering from “captain envy,” perhaps?

2. When he ignored everyone else’s human nature.

Can I just talk about the entirety of “Human Nature” and “The Family of Blood”? The Doctor turns himself into a human named John Smith to hide from a family of murderous aliens. Everyone ends up worse off because of this. The Doctor never treated Martha Jones right, even considering how annoying she often was, but in this story he’s downright cruel. For starters, out of all the times he could have chosen, he has to go and hide in 1913…with a black companion. He has her disguise herself as a servant at a military boarding school, even though he knows she’ll probably face ill-treatment because of her low class and skin colour (as, indeed, she does). He gives her the thankless task of looking after his amnesiac human self and leaves her with instructions, but fails to consider the possibility that John Smith might fall in love with another human. Which, of course, he does, making the smitten Martha’s job even more difficult. Then there’s the aftermath from John Smith’s transformation back into the Doctor. Poor Joan, who already lost a husband, has to deal with losing another love interest. And then his entirely different alter ego has the cheek to suggest she go travelling with him instead! And let’s not forget what John Smith himself has to go through. The Doctor seems to intentionally make his choice as difficult as possible (though there could be deeper reasons for that…). Finally, as bad as the Family of Blood were, the punishments they receive for their crimes seem just a bit extreme. “We wanted to live forever, so the Doctor made sure that we did.”
All in all, you can hardly blame the Doctor for ending this story with, “Time we moved on.”

3. That time when he turned into the Master for a second.

But at least his hair stayed fabulous.

Okay, this is an obvious one. “The Waters of Mars” is about as dark as Doctor Who gets, and it’s certainly a low point for the Tenth Doctor. It starts with an accidental visit to the first human colony on Mars, which the Doctor knows is doomed to be destroyed. And the death of the colony’s leader, Adelaide Brooke, is a fixed point in time, so the laws of Time forbid him to save her. So when extremely creepy water monsters start picking off the colonists one by one, he tries to leave. But listening to their deaths over his space suit’s radio turns out to be too much, and he snaps. He decides to defy the laws of Time, saves Adelaide and the other two survivors, and arrogantly declares himself the Time Lord Victorious. Adelaide, however, is smart enough to realize that messing with fixed points is a very dangerous thing, and a Doctor without rules will spell disaster for the universe. So she kills herself, restoring the timeline to its proper shape. The Doctor is devastated, but still refuses to accept this incident as a sign that his current life is coming to an end.

4. When he faked his death and didn’t bother to tell anyone. 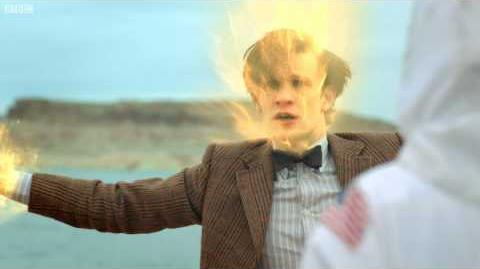 The Eleventh Doctor seems, on the surface, to be a lot nicer than the Tenth. He’s less angsty and more prone to wearing silly hats and using words like “spacey-wacey.” But underneath all that, he really has a much less effective moral compass than Ten, and he’s less sympathetic towards his human companions. Case in point: his “death” in season six. Not only did he allow everyone (including the audience) to think he really died for good in “The Impossible Astronaut,” but he made a point of inviting all the Ponds to come and watch–making the fake death a fixed point, and also ensuring that they would all be burdened with the knowledge of his impending doom for the rest of the season. River, who stood to suffer the most from thinking she’d killed the Doctor, had to marry him before he’d tell her the truth, and he tried to let Amy and Rory live for two years thinking he was dead. Good thing River didn’t feel like keeping secrets from her parents…

Your puppy-dog eyes do not excuse you.

But the worst Eleven example has to be “The Girl Who Waited.” The Doctor’s usual carelessness about where the TARDIS takes him backfires in this episode, big time. Turns out, he and the Ponds have landed on the beautiful Apalapucia while it’s being ravaged by a deadly plague. Worse, they’ve landed in a quarantine facility with two different time streams. Amy promptly gets lost in the wrong one. The Doctor promptly takes the TARDIS to rescue her…and arrives 36 years too late. Old Amy is understandably bitter and unhinged, having spent all that time with only hostile, faceless robots for company. Rory, of course, wants to go back and save “his” Amy to prevent all this from happening to her, but Old Amy refuses to help him, pointing out that this would erase her from existence. So the Doctor tells her that he’s worked out a way to bring the younger Amy into her present, allowing both of them to survive. Cut to the end of the episode, when Rory carries an unconscious Young Amy into the TARDIS, Old Amy tries to follow…and the Doctor slams the door in her face. Turns out he was lying to get her to cooperate. There can only be one Amy in the TARDIS, and Old Amy is left to die after a gut-wrenching farewell to Rory.
The Doctor’s expression when Young Amy asks “Where is she?” is heartbreaking, but he earned every ounce of that guilt.

And now, with Twelve’s more abrasive personality, it looks like these moments may become more common. But then, Nine wasn’t exactly a ray of sunshine all the time, and I loved him. As long as the Doctor’s unheroic moments remain rarer than his heroic ones, I’ll be happy. After all, he’s only huma–oh, wait.

One thought on “Times When the Doctor Was a Jerk”