September is almost over! (Can you believe it?) That means I only have a couple more days to talk about my favourite LOTR characters! So, as a brief overview, here’s how much I love each member of the Fellowship of the Ring, from least to greatest:

Legolas is an elf, which means he’s automatically cool. He can see really far, he can walk on top of snowdrifts, he’s a fantastic archer, and he’s definitely one of the people you want on your trail if you ever go missing. He’s also not ashamed to brag about all these skills from time to time. But I’m afraid he’s also the most boring character in the Fellowship. He just…doesn’t DO a whole lot, on his own anyway. And as cool as elves are, they’re not the most relatable creatures in Middle Earth. Being thousands of years old and having perfect hair can be kinda off-putting to us mortals.

In most ways, Gimli is a typical dwarf–obsessed with treasure, fiercely loyal to his kin, a bit trigger-happy with an axe–but unlike most dwarves, he’s able to see the value of other creatures and their ways of life. His unusual friendship with Legolas and Aragorn, and his chivalric awe of Galadriel, make him stand out among his race. He even ends up taking a ship to Valinor, the only dwarf in Middle Earth history to do so. But he suffers from the same problem as Legolas: not enough personality, and no clear purpose in the Fellowship except to represent a particular Free People of Middle Earth.

Oh, man. Boromir is such a tragic character. He inherited a lot of pride and self-sufficiency from his father, sure, but he’s far from an evil sort at the beginning of the book. He’s a valiant soldier trying to protect his city, who ends up as an unfortunate example of the Ring’s effect on men. But he does redeem himself, to an extent: after attacking Frodo, and coming to his senses, he heroically dies trying to save Merry and Pippin from a huge band of Uruk-hai. And he confesses everything to Aragorn, which also took courage, considering his prideful nature. I think it’s also worth mentioning that Sean Bean’s portrayal of him was one of the best performances in the movies. But Boromir’s brother is still better than him. 🙂

Out of all the Fellowship, I think Pippin is the one I’d choose to spend an afternoon at the pub with. He’s just a really fun guy, even after everything he went through in the book. He’s overly impulsive at times, and he doesn’t have a good head for maps or strategy, but he displays great courage when it counts. Plus: he’s great with kids, he can sing, and he’s an awesome fighter for a hobbit. He single-handedly killed a troll, for Pete’s sake! He also saved Faramir’s life, which is very important, because Faramir is the best. I love Pippin. In Merry and Pippin’s relationship, Merry is the brains. He’s as eager to rush into battle (or the bar) as his best friend, but he’s smarter about it. You wouldn’t catch him looking into a Palantir, and you definitely won’t catch him getting lost in the woods. (He knows all about the Old Forest AND Fangorn. You see, kids, it pays to study.) He’s also fiercely brave, and a natural leader. Guess who headed up the conspiracy to leave the Shire with Frodo in the first place? Guess who’s calling most of the shots when the hobbits have to cleanse the Shire at the end? Oh yeah, and GUESS WHO STABBED THE WITCH-KING FIRST? And Merry’s first words upon waking from the death-like sleep that resulted from his encounter with the Witch-King? “I am hungry. What is the time?” This, my friends, is a true hobbit. 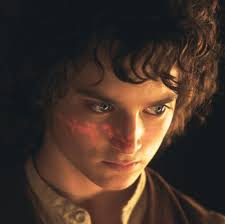 Frodo isn’t the most likable character in Middle Earth, to be sure. He’s shockingly serious and philosophical for a hobbit, yet he can be a bit dim at times. And the increasing strain placed on him by the Ring throughout the book makes him…not much fun. But give the guy a break! He has the hardest fight of anyone in the Fellowship, which is saying something. He chooses–twice–to go into the unknown, carrying an object guaranteed to draw all things evil after him at all times, and then, when the Ring threatens to corrupt his small band of allies, he chooses to leave even them behind, and to enter the most dangerous place in Middle Earth alone. Early in the book, we have him fighting Barrow-Wights and facing down Black Riders, and later he manages to hold his own against the giant spider Shelob (for a while, at least). Add his constant, and until the end, successful, struggle against the Ring’s temptation, and here we have one tough-as-nails hero. Even though Frodo failed in the end, the book makes it clear that no one in Middle Earth could have done better, not even its greatest mythological warriors. Funny how they forgot to put most of this in the movies…

Speaking of thrilling heroics…Aragorn’s transformation from weather-beaten Strider to King Elessar is one of the most dramatic parts of the story. Of course, I liked him from the beginning. He’s very kind to the hobbits, but not in a condescending way. Despite being heir to the greatest kingdom in Middle Earth, he spent years protecting the Shire, and then the Ringbearer, without taking any of the credit. But when his kingdom needed him to actually become a king, he stepped up big time. Like Faramir, he combines a warrior’s strength with a love for those he protects…but more so. One of his symbols of authority is a sword, but “the hands of the king are the hands of a healer.” Aragorn is definitely someone you want on your side, no matter what you’re up against. The fact that he has an army of the dead at his disposal doesn’t hurt, either.

Oh, how I love Gandalf. I loved him from the very first words he spoke in The Hobbit. That sarcastic sense of humor. Actually, Gandalf’s ability to be funny, considering how old he is and how much he’s seen of Middle Earth, and the fact that he’s practically an angel, is one of his more impressive traits. Another is his appreciation of small, ordinary things, like hobbits and their pipe-weed. Gandalf has fought with demons and dragons, has defeated Sauron himself and come back from the dead at least once, yet he still makes time to light fireworks at Bilbo’s birthday party. He’s apparently the only wizard who has any patience for such things, and that shows how very wise he is. Gandalf is strong enough to know that evil can’t be defeated by strength. That only the bravery and decency of ordinary people can find a chink in its armour. And that’s why, without Gandalf, Middle Earth would be screwed.

But the highest ranking has to go to Sam. Sam, the simple gardener. The poet and lover of all things Elvish. The unflinchingly loyal friend. The optimist who carries frying pans into Mordor. The one with more hobbit-sense than all the other hobbits put together. The guy who can get excited by seeing an oliphaunt even in the midst of a terrible battle. The second of two people in the Ring’s history to give up possession of it willingly (and he didn’t even have Gandalf to help him). The one who turned Shelob into a drooling, cowering mess; who sang songs about light in Cirith Ungol; and who carried Frodo up Mount Doom. If you can read The Lord of the Rings and not love Samwise Gamgee with all your heart, then I’m a little concerned for you as a human being. Without Sam, there is no story (and there’s certainly no Frodo). He embodies what The Lord of the Rings is really all about: ordinary people who save the world by simply doing the right thing and refusing to give up no matter how much it costs them. Which is probably why Tolkien gave him the last word in the book. “Well, I’m back.”

2 thoughts on “The Ranking of the Fellowship”