I just realized that, out of my top five sci-fi movies, not one featured aliens of any kind. Now that I think of it, aliens have always been my least favourite ingredient in science fiction (that is, unless they have two hearts and look like reasonably attractive British men). Too many alien stories portray extraterrestrials simply as slimy green things intent on messily killing humans and blowing up our cities, and to me that’s just not very interesting. But there are some alien stories I do find interesting, and I’m going to dedicate my next few posts to those stories. First up is: 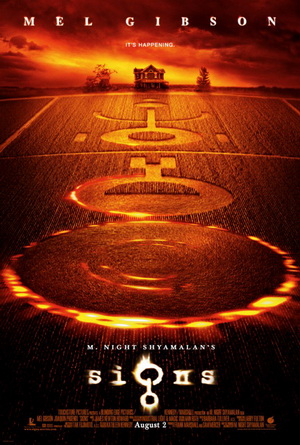 Plot Summary:
Graham Hess, a disillusioned small-town priest, wakes up one morning to find huge crop circles mysteriously carved into the cornfields behind his house. He thinks it’s just a prank by the town hooligans, until his daughter turns on the news and discovers that the crop circles are showing up all over the world – along with unexplained lights in the sky and shapes in the dark. Sure enough, aliens are coming, and it’s up to Graham to protect his family despite their lack of faith in him.

Memorable Quote:
“The nerds were right.”
…and practically everything else Merrill says.

Why I Love It:
Like most of M. Night’s films, Signs has its fans and its haters. Personally, I am a fan because I love understatement and subtlety in movies, and I love stories that ask good questions. (I’m a fan of The Village for the same reasons.)

Signs is very scary in the best possible ways: no blood and guts, no long shots of tentacled monsters, just a relentless atmosphere of impending doom with the occasional shriek-inducing surprise. I’m not a horror movie buff by any means, but I have seen several frightening movies and TV shows (The Walking Dead comes to mind), and this is still the only movie that has ever made me scream out loud. The fact that we only get the barest glimpses of the aliens helps with that a lot. What you don’t see is always scarier than what you do, especially in a movie with a low CGI budget. 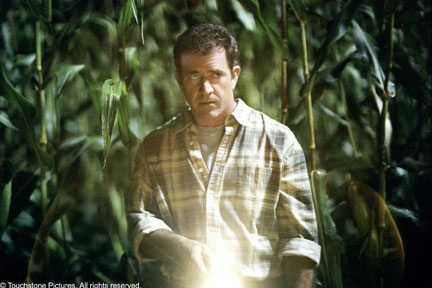 But as always, what really makes Signs compelling is the characters, and the movie’s subtle details add a lot to their development as well. Consider the opening scene: Graham wakes up suddenly, as if from a nightmare. As he gets up to check on his kids, we see that he’s sleeping alone in a double bed. He has a picture of his wife on the night stand. On the wall, there’s a stain where a crucifix was recently removed. So within the first thirty seconds of the movie, before any dialogue is spoken, we already know two very important things about Graham: his wife has just died, and he has lost his faith. All his internal conflict for the rest of the movie comes from those two facts. And that’s the conflict I really care about – the aliens are just catalysts for the Hess family’s crisis of faith.

The rest of the characters are great, too: I love Merrill to death, and little Bo is hilarious (Abigail Breslin’s acting was much more impressive when she was six than it is now). The more we learn about their history, and the more their dysfunctional relationships come out, the more we care about what happens to them. And the weird small-town characters who show up for a few scenes add lots of fun, too. 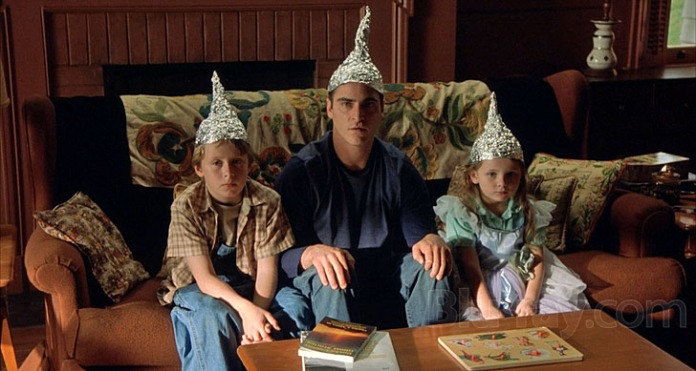 “It’s so the aliens can’t read our minds.”

Best of all, Signs isn’t afraid to ask some really big questions: Is there a God? Is the world ruled entirely by chance, or are there such things as “signs” and miracles? (See what they did there?) And does it matter what we believe about such things? Whether you like M. Night’s solution to these questions or not, you’ve got to give him credit for asking them, especially in such a quiet, non-preachy, and often fun way.

This isn’t your typical alien movie, but it is a lovely one, and I’d pick it over War of the Worlds any day. Namarie!