All right, here it is at last: my take on the most-debated question among Whovians. Which Doctor is the best?

In one sense, I think that question is really irrelevant. The Doctor is always the Doctor. All the actors who have played him are portraying the exact same character, at different stages of his life. How can you say that one is better than another when they’re all the same person? 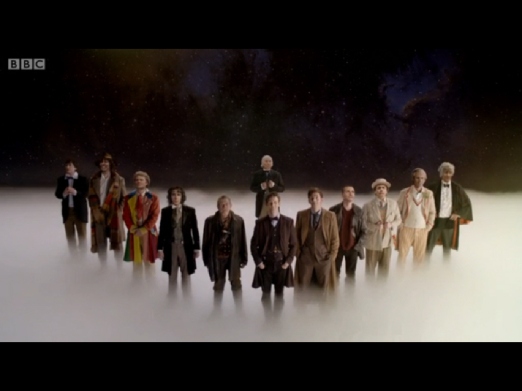 But on the other hand, it’s easier to like certain people during some stages of their lives than others. In that sense, asking which Doctor is the best is similar to asking whether you like someone better as a teenager or a twenty-something. He’s always the same person, but he acts differently depending on what he’s going through at the time. Plus, of course, each actor brings a new angle to the character.

So the debate isn’t totally irrelevant. I just try not to get too heated about it, because in all honesty, I love all the Doctors I’ve seen. Since I’m a new Whovian, that means the Ninth, Tenth, and Eleventh (and now the War Doctor, I suppose). I think Eccleston, Tennant, Smith, and Hurt are all brilliant actors who each added something new and wonderful to the character. I respect people who think Christopher Eccleston was the best–he did successfully reboot the series, which is impressive, and he had so much sass and such a great out-of-nowhere smile. I also respect people who think Matt Smith is the best–he’s hilarious, he has the best stories to work with, and there’s a subtlety about his performance that I like.

But my own personal favourite is the Tenth Doctor, played by David Tennant. First, because he was the one who really got me hooked on the show. After getting through season one, I still wasn’t sure if I could keep watching a show this weird, until Ten showed up–armed with a sword and a Lion King quote. There was no going back after that.

To me, David Tennant was the most complete Doctor: he showed us the character at his very best and worst. Depending on the situation, Ten was a playful little boy, a sad old man, a vengeful god, or a charming lover–and the actor made all those roles blend seamlessly together into one larger-than-life character. Even his cheesy episodes were fun to watch, and his good episodes were, well, amazing. Whenever Ten was around, I felt that not only the universe, but the storyline itself, was in good hands.

Of course, Ten had some very unheroic moments, and he ended on a tragic note. But even his low points made for great storytelling. He’s often been called the most “human” Doctor, and I think the most striking evidence of that is the fact that he was so arrogant and stubborn half the time. And David Tennant is an absolutely brilliant actor, so he got the most out of the Doctor’s every flaw, as well as his every strength. He made every emotion big and dramatic, yet it always fit the situation perfectly and never felt overdone. All his Shakespeare experience probably helped.

Plus, nobody can say “well” or “molto bene” or “Allons-y!” like David Tennant. And suits with Converse tennis shoes are the coolest thing ever.

So there you go! I love all the Doctors, but for the above reasons, the Tenth will always be my favourite. That being said, I’m really looking forward to the Twelfth Doctor. It’ll be interesting to see what Peter Capaldi brings to the table.

This is what I love about Doctor Who. Always something new and exciting coming up!