I’m going to post about the various Doctors, and which one is the best, and all that, but first I want to talk about the companions.

The Doctor always has to have at least one human travelling with him, to give him someone to talk to, keep his ego in check, and to give the audience a normal person to relate to. The companions who last longest are usually young, pretty women from 21st-century London, but some of the short-term companions have been more varied. One example is the winner of today’s”companion award:” Most Underrated Companion.

We were first introduced to Mickey, in the pilot episode of the new series, as Rose’s useless boyfriend. The Doctor was so unimpressed with him that he didn’t even invite him into the TARDIS at first, but after he stopped screaming so much and helped sort out a few evil aliens, the Doctor allowed him to tag along. Mickey eventually chose to stay in a sealed-off parallel universe after his counterpart was killed, but he still managed to return for a couple of season finales.

Mickey never seems to get much credit from anyone. Rose can’t be bothered with him after she meets the Doctor, the Doctor can’t even get his name right, and the writers don’t give him much screen time. But none of that is really fair, in my opinion. Mickey might be a little slow in the uptake, but he’s hardly stupid. He’s pretty brilliant when it comes to computers and machinery. He doesn’t stay timid for long, either. During his time on the show, Mickey changes more radically any other character (except the Doctor himself). He goes from the whiny coward who hid behind Rose in his first episode, to the fearless leader of an underground army. When we finally say goodbye to him for good, he’s rocking an awesome beard and fighting Sontarans alongside his wife, another underrated companion. Talk about a transformation! 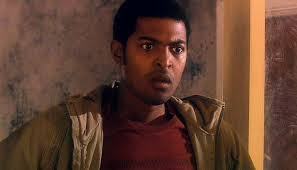 Mickey is also an incredibly good sport when it comes to his dating life. Do you know any men who, after being unceremoniously dumped by a long-term girlfriend, would remain friends with both the ex and the guy she dumped them for? Because I don’t. Sure, Mickey wasn’t happy about losing Rose at first, but he always tried to help her in her adventures, even when she gave him no credit. He even helped Rose get back to the Doctor in The Parting of the Ways, because he knew that was what she wanted. And it’s clear that when he and the Doctor really do part ways for good, there are no hard feelings between them. Kudos to Mickey for acting like a mature adult on TV. It’s a rare and beautiful thing. 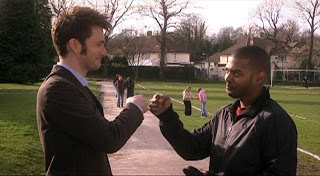 Also, in my opinion, Mickey is the only character on the show ever to give an accurate description of Captain Jack Harkness. More on that later.